If you do a Google search of Waterbury, CT you will probably get a pretty generic list of fact sheets and local services.  Why would someone Google Waterbury? People around here do not say the nicest things about it.  I have been guilty myself of the trash talking. Living in a suburb of the “brass city”, i have to pass through it quite often, and i do most of my grocery shopping there.  Sometimes it annoys me…Waterbury… but i have decided it deserves a little love.  Especially on Easter.

This Easter morning we woke up to another news story of a vacant factory in Waterbury burning to the ground.  There seems to have been a rash of fires there – all empty, run down houses and businesses which while standing, have been inviting plenty of seedy behavior.

One area that is particularly run down is that of the religious tourist attraction – Holy Land USA.  Although I don’t think there have been any fires there, it’s current state of neglect and disrepair attracts less than wholesome activities.  It is no longer the tourist attraction it was intended to be, and it is surrounded by an air of darkness.

In the mid 1950’s, a lawyer named John Greco built a miniature replica of Jerusalem and Bethlehem on a 17-acre hill in Waterbury.  It became one of Connecticut’s most popular tourist attractions in the 1960’s and 70’s, drawing in thousands of Bible readers every year.  I have not read the Bible, so I have no knowledge of most of the stories and passages, but I think this place on the hill must have been very special to a great many people…especially to Mr. Greco and the many volunteers and believers who built it.  It closed in the 80’s, shortly before its creator passed away, and since then it has been neglected and vandalized, with not much hope for restoration.  And only last year a young girl was tragically raped and murdered just beneath the cross.  The place has been mostly off limits, but I had read that people go up there to witness remnants of the tiny biblical scenes.

The other day I decided to go up there with my husband on a whim.  Now that I think about it though… I had probably asked him about thirty times if we could go up there, so it was more likely a result of my relentless nagging.  Anyway, I felt extra drawn to try to find it that particular day for some reason.  Maybe it was the gloomy, slate gray sky.

We found the winding dead end street, and hesitantly drove up to the rickety gates.  I couldn’t believe I was right there, at Holy Land… the place behind the landmark cross I remember seeing as a child when we drove up to see my second cousin’s in Ansonia once a year… The cross that stands majestically, but sadly atop a small mountain alongside I-84.  I was absolutely fascinated.  I was positively terrified.

I yanked my camera out of my purse, and started snapping from the passenger seat.  Of course now I just had to walk up to it.  Eventually, I ended up inside the gates and off i went with my camera, sneaking along the overgrown path.  My husband was begrudgingly escorting me, but I was definitely freaking out.  I photographed every inch of the place… or as much of it as i could, knowing we probably weren’t supposed to be in there, and knowing how utterly stupid we were, wandering around such a secluded, now sinister place.  We made it partially up the hill, just within site of the cross, when we heard voices behind the tangled bushes. (Hellll, no… we weren’t crashing that party.)  I managed to capture a few shaky images of the cross before we hi-tailed it out of there.  As we power walked down the bend, we came face to face with another group of “could be totally innoncent, could be gangstas” twenty-somethings. W immediately got that look on his face, which said… “I’ll be grabbing that rock Erica, and when I start taking people out with it, you run like f*ck!”  We safely made it to the car and I immediately inspected each photo to see the details I missed in our haste.  Cool.

As millions of people around the world spend their Easter traveling to the Holy Lands, take a peak at my snap shots… remnants of a dreamer’s once realized dream.  I do hope they will respectfully contribute to the memory and sad beauty of this abandoned place, doomed to be further destroyed or forgotten.  But I also encourage you to check out these great images from the years before its hopeless decline.

… Later that same day, we ventured up to my favorite thing in Waterbury, the life-size replica of a Moai statue from Easter Island.  The statue, which can also be seen from I-84, guards the Time Expo Museum – its authentic versions thought to have historically functioned together with the sun as a primitive time piece. Easter Island, I have learned was named as such, by the Dutch explorer who encountered it on Easter Sunday, 1722.  I’ve never been to the museum, but i do adore its giant loveable protector.

If you happen to be driving through Waterbury, make sure you look up to your left and off to your right for these creative, Connecticut treasures.  Maybe you will decide to hop off the freeway, and venture up close.  Anyway, Happy Easter all, however you celebrated it. 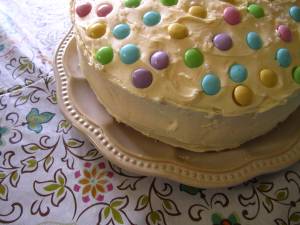